In this week’s Rugby 101, we are reviewing player positions, numbers and scoring. 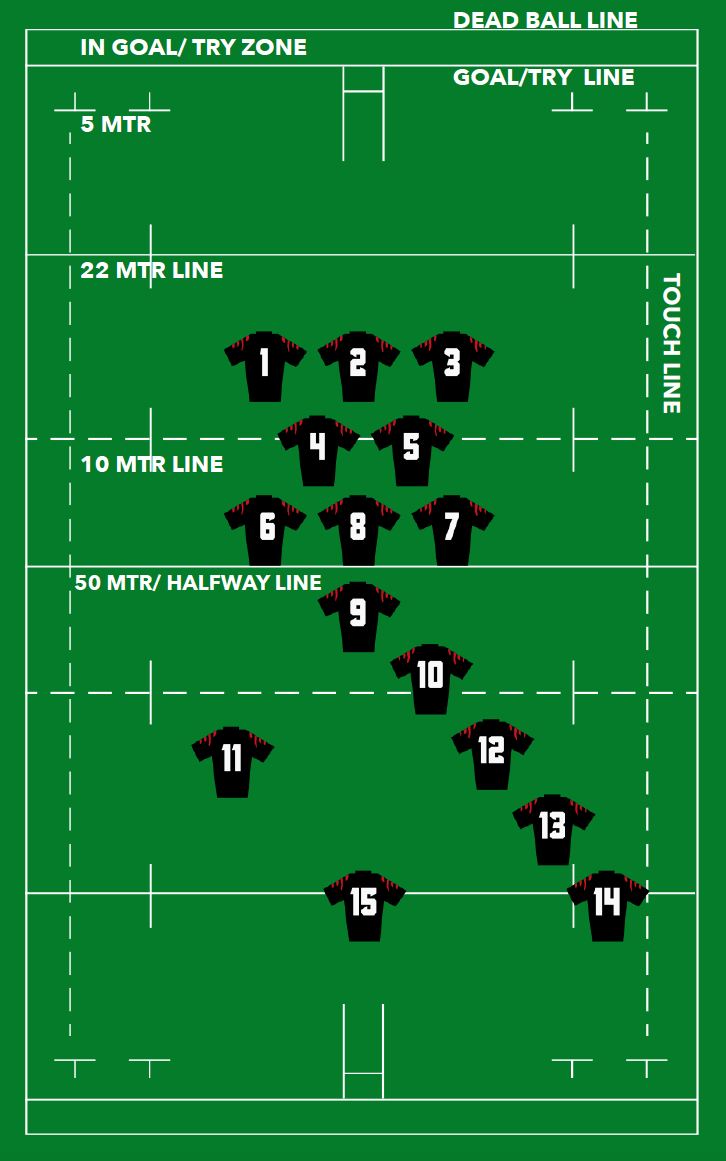 PROP #1 #3 These big boys’ primary role is to be the anchor of the scrum and lift the line out jumpers. These are some strong guys, who aren’t afraid of contact.

HOOKER #2 In the middle of the scrum, it’s a hooker’s job to win the ball. During a line out, the hooker throws the ball in. A strong neck and accurate throwing is very important for this position.

LOCK #4 #5 This position is typically the two tallest men on the field. Winning the line out and kick-off is their key role.

FLANKER #6 #7 These two should be everywhere on the field making tackles, being the first at a ruck and disrupting the opposition at every chance.

EIGHTMAN #8 An original name, we know… but this guy needs to do everything. The number 8 must secure possession at the base of the scrum, carry the ball in open play and provide the link between the forwards and backs in attacking phases. He must also defend aggressively.

SCRUMHALF #9 This position is the link between forwards and backs at the scrum and lineouts. A true leader constantly giving orders to his forwards, the 9 will judge whether to distribute quick ball to the backs or keep it close to the forwards.

FLYHALF #10 This is rugby’s equivalent to a quarterback. He’s the decision-maker and gives the number 9 his orders. He chooses to kick, pass or make a break based upon split-second interpretations of the phase of play.

CENTERS #12 #13 The centers are key in both defense and attack. In defense, they attempt to tackle and bring down their opponents. While in attack, they use their speed, power and creative flair to bust through the other team’s defense.

WING #11 #14 These are the fastest men on the field and can be compared to wide receivers. They need pace and vision to juke or outrun opponents in order to score tries. They must be good tacklers, as they are lined up against equally elusive runners on the defense.

FULLBACK #15 The last line of defense, the fullback must be confident under a high ball, have a good kick and enjoy the physicality required to make try-saving tackles.

Now, on to scoring.

TRY – 5 POINTS A try is scored when the ball is grounded over the opponents’ goal line in the in-goal area. A penalty try can be awarded if a player would have scored a try but was interrupted by foul play from the opposition.

CONVERSION – 2 POINTS After scoring a try, that team can attempt to gain 2 additional points by kicking the ball over the crossbar and between the posts. However, the ball must be kicked from a place in line with where the try was scored.

PENALTY – 3 POINTS When awarded a penalty after an infringement by the opposition, a team may choose to kick at goal.

DROP GOAL – 3 POINTS A drop goal is scored when a player kicks for goal in open play by dropping the ball onto the ground and kicking it on the half-volley.

In regard to time, rugby is played in two 40 minute halves with a 10 minute halftime. If extreme heat endangers players’ safety, the referees may also allow a 2 minute water break once per half.

Next week, we will be reviewing the history of the Warriors, MLR and the game of rugby.